What happened to the Textile Industry in America?

Textile Industry Making a Comeback in the U.S. Southeast

As the textile industry becomes transformed by technology, companies are considering highly automated, environmentally conscious production facilities in the U.S. Southeast, where the infrastructure necessary for this industry’s success is already in place.

Changes in global economic, social, and political environments are having major impacts on the textile industry. Manufacturing technology is changing. Consumer trends are changing. There is a rapidly growing middle class and an increasing cost of doing business in China — once the world’s cheapest country in which to manufacture textiles and apparel. The speed-to-market of products has never been more important. Proposed policy changes and U.S. border tariffs are making companies consider shifting production capacity to the United States. For these reasons, the United States is finally seeing a resurgence in the textile industry.


From 1994 to 2005, the United States lost more than 900,000 textile and apparel jobs to offshoring. Since the 1960s, low wages and new industrial production capacity in countries such as China, India, and Brazil made textile production in the United States a losing proposition. Most U.S. textile companies either shut down or moved abroad, and it seemed as though the U.S. textile industry would never make a comeback. This hit the U.S. Southeast particularly hard. As the Great Recession loomed, the only evidence of the once-thriving industry was the old derelict factories — tall smokestacks, short ceiling heights, and creeping kudzu vines swallowing what was left of the buildings. 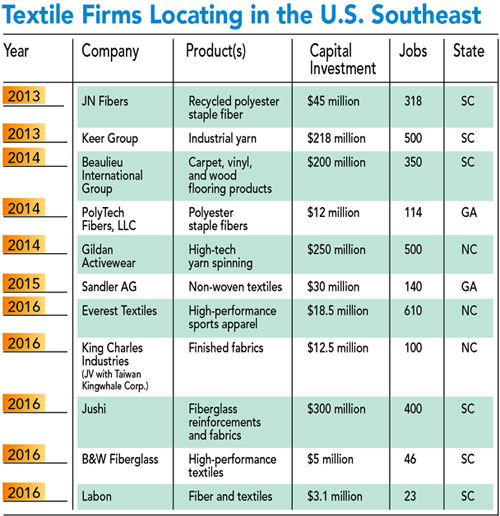 Fast-forward to 2017. The pendulum is swinging back and textiles are returning as lean, highly automated, environmentally conscious production facilities. Within the last five years, there have been significant announcements by foreign-owned textile companies investing in the United States, with site selection choices clustered in the Southeast once again.

These location decisions are driven by port proximity, low utility costs, a quality affordable labor pool, and access to training. As consumers become more socially aware, many retailers are strongly encouraging their suppliers to build an environmentally safe U.S. presence to capture the PR benefits of being “Made in America.” Companies are also placing an extreme amount of importance on speed-to-market, both from a construction perspective and proximity to market perspective. The need to be up and running in a short timeframe and with limited capital expense has driven investment back to the Southeast.

Because the southeastern United States was once inundated with textile facilities, the infrastructure necessary for industry success is already in place. Wastewater treatment plants are already designed to accommodate the fabric dyeing process and have the ability to treat this kind of effluent without much capital investment or new permitting. The Cotton Belt in the Southeast provides close proximity to one of the industry’s major raw materials. A history of textile manufacturing has left behind a legacy workforce with the technical know-how and work ethic to support industry newcomers. Training programs are in place to prepare workers to operate highly automated facilities, and universities have thriving textile engineering programs.

The U.S. textile industry saw $2 billion in capital investments in 2015. In addition to new greenfield investment, existing textile companies that weathered the downturn are retooling their businesses and automating the work process.
The United States is currently the world’s third-largest exporter of textiles, and saw a swift 39 percent increase in exports from 2009–2015.

Some of the factors causing companies abroad to invest in the United States include:

China, the world’s largest exporter of textiles, is growing an emerging middle class with rapid wage increases averaging up to 15 percent a year. While a Chinese production worker sees a large raise each year, that same laborer is not increasing production capacity. This unbalanced wage growth is biting into what was once China’s true competitive advantage.

Strikes in manufacturing operations in China have also increased drastically and have created a sense of tension and instability for Chinese manufacturers. According to The Washington Post, there were 503 reported strikes across China in January 2016 compared to eight strikes in January 2011. A survey by Hong Kong University of Science and Technology states that strikes are on the rise because companies have laid off approximately 3.7 percent of their workforce due to rising wages. Uncertainty and lost productivity due to strikes give CEOs another reason to consider the more stable right-to-work states in the southeastern United States.

The Cotton Belt in the Southeast provides close proximity to one of the industry’s major raw materials.

The shale-oil boom has presented a significant competitive advantage for the United States. Industrial users are seeing natural gas prices average about one-third of those in most other industrial economies. Lower natural gas prices are driving U.S. industrial electricity rates lower. U.S. rates are on average 30 percent to 50 percent lower than for other major exporters. Michael Porter with Harvard Business School suggests that the United States has a 10–15-year head start on capturing the benefits of these unconventional resources.

Consumer preferences are changing, and textile firms are changing with them. For example, fast fashion trends have forced apparel companies to make smaller batches of clothes more frequently, and speed-to-market is crucial. Where manufacturers used to have to design four seasons of clothes, companies are now going through the redesign process 24–26 times a year, forcing manufacturers to be more flexible and deliver products to market quicker. Zara, a Spanish-owned retailer, is delivering new products worldwide to their stores just 15 days after design is started. When every day matters to bring products to market, it is no surprise that companies want to be close to the United States, the world’s second-largest textile consumer market.

Customization is also an emerging trend. Adidas Pursues Rival Nike with In-store Personalization and Manufacturing, The Drum NewsAdidas is implementing new stores that manufacture and personalize products within four hours; previously it took 12–18 months to put new products on the shelf. By creating shorter product life cycles, textile firms are taking the guessing game out of product demand and allowing their manufacturing process to respond in real time to customer preferences.

These changes in the fashion industry are compounded by shipping logistics issues in China. Unlike in the United States, where major carriers (FedEx and UPS) dominate the market, shipping companies in China are fragmented due to government regulation. Highway and port infrastructure are improving, but still not sufficient for effective logistics and are often delaying shipments abroad.

A history of textile manufacturing has left behind a legacy workforce with the technical know-how and work ethic to support industry newcomers.

On January 23, 2017, President Trump signed an executive order to end the possibility of a Trans-Pacific Partnership (TPP), which aimed to create an export-led growth model supporting free trade with 11 countries in the Pacific, excluding China. The agreement would have phased out approximately 18,000 tariffs among the participating countries and helped smaller companies navigate export rules, trade barriers, and red tape. Trump argued that by ending the TPP, companies would be more likely to send FDI to the United States to avoid import tariffs and sluggish logistics. Trump has proposed a 20 percent tariff on incoming goods from Mexico and up to 35 percent from China. In a low margin business, these tariffs would create a significant impact on the textile industry’s bottom line. While there is no way to predict what these policy changes will have on the textile market, companies are at least devoting time and resources to explore adding capacity in the United States.


Technology Changes in the Manufacturing Process

Although the United States has made strides toward becoming more competitive on production costs, it is still not the cheapest option for manufacturing. Until the apparel (cutting and sewing) portion of the industry can be automated, these jobs will remain in countries such as Vietnam, Mexico, and Honduras, where low wages attract labor-intensive operations.

However, the United States has created a niche and competitive advantage in highly technical material manufacturing. Capital investment in yarn, fabric, and non-apparel textile product manufacturing has risen from $960 million to $1.7 billion from 2009 to 2015 — a 75 percent increase. The United States is especially poised for growth in a subsector of the textile market called “smart textiles,” or nanomaterials. Smart textiles are fabrics that have been developed with new technologies that provide an added value to the wearer. While the global smart textiles sector grew at an annual growth rate of 18 percent from 2004 to 2014, smart textiles grew more than 27 percent in the United States.

The U.S. textile industry saw $2 billion in capital investments in 2015. Examples of smart textiles that you may find in your own closet are shirts with UV protection or athletic wear that wicks moisture. More extreme examples of smart textiles are military uniforms that can change color to blend in with the environment or can withstand major blast impacts. Medical applications are being introduced that monitor and communicate physiological changes. These materials will be able to administer drugs and detect blood clots. These types of technologies will require the presence of an extensive university research network and the ability to transfer technology to the labor force.

In an effort to modernize the apparel industry, Atlanta-based SoftWear Automation Inc. recently introduced a solution called the “sewbot.” Sewing was once thought to be a delicate job only for human hands, but sewbots are using cameras to track needle stitching and coordinate precise movements of fabric using lightweight robots. If sewbots gain traction, changes could be even more drastic for the industry.

The textile industry in the United States, specifically the Southeast, is poised for growth. The foundation of infrastructure that was laid for former textile facilities provides a stable environment to accommodate a rapidly changing industry. Textile and apparel markets will grow across the globe, but the United States will attract the more complex, higher-paying jobs, while providing access to one of the world’s largest consumer markets.
Beth H. Land, Vice President, Site Selection Group

Beth H. Land has established a southeastern presence for SSG in Greenville, S.C., and manages corporate site selection projects. Based on her past experience in helping companies choose where to locate, she also offers economic development services to communities, focusing on site-readiness initiatives. Land’s professional experience includes more than three years at McCallum Sweeney Consulting as a senior consultant, working with clients such as Dollar General and Aerojet Rocketdyne. She also managed the Duke Energy Site Readiness Program, South Carolina Department of Commerce Site Certification Program, and Tennessee Valley Authority Mega Site Certification Program. Prior to working at McCallum Sweeney, Land spent more than three years as a project manager for York County Economic Development working to recruit new business investment. Before joining York County, she was the project manager at Avenger Aircraft and Services.